The "Rick and Morty" Rift

on February 02, 2020
Not too long ago, I paid a visit to the Rick and Morty subreddit. I wanted to see what people thought about the first half of the recent fourth season of the show, which I really enjoyed. In doing so, I realized something very interesting about the fanbase, or at least the fanbase as it is represented on anonymous message boards. More than any other show, the Rick and Morty fanbase does not agree on what makes the show great. Not only do they not agree - at risk of oversimplification, they seem split into two diametrically-opposed sides. What really stuck out to me, as I looked through the online commentary, is that one side seems to love the show more for its dramatic elements, while the other seems to love the show more for its comedic elements. This presents an interesting dilemma for the Rick and Morty writers, and it will be interesting to see how they handle it moving forward.

This fanbase schism revealed itself in further interesting ways on the Rick and Morty message boards. Not only did I see how the priorities of the fanbase were so split, I also realized how the fan response to Season 3 vs. the first half of Season 4 (for the remainder of this, the first half of Season 4 will be referred to simply as “Season 4”) represented this split so well. Whereas the “pro-serious side” liked Season 3 and disliked Season 4, the “pro-comedy side” had the opposite view, liking Season 4 and disliking Season 3. Simply put, this is because Season 3 places a stronger priority on more dramatic elements, whereas Season 4 places less focus on the drama and more on the comedy.

Rick and Morty has always had an undercurrent of serious elements, but Season 3 marked the first time that these elements took more of a central role and were approached more intentionally. A lot of the storylines this season had foundations in themes that you would find in more out-and-out dramatic television -  the children’s discomfort with their parents’ divorce (S3E2 “Rickmancing the Stone”), Beth struggling to understand her father and her identity (S3E9 “The ABC’s of Beth”), explorations of the hidden secrets of the multiverse (S3E7 “The Ricklantis Mixup”), and displays of Rick’s impressive genius (S3E3 “Pickle Rick”).

The more sustained dramatic/self-serious direction of the show fostered the growth of this subset of the fanbase, and the increase in fan interaction around these more dramatic elements of the show was noticeable. I saw a lot more YouTube dissections and analysis videos around family relationships, character arcs, and fan theories (Evil Morty being a major source of theorization). In addition to this uptick in unironic analysis, I also saw a lot more unironic Rick fan art (see below for examples) during and after this season, all of which illustrated that this section of the fanbase really valued the serious/dramatic elements of the show. 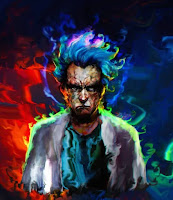 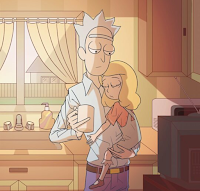 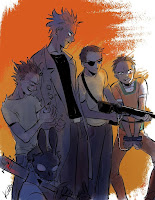 Season 4’s “thesis statement”, as it were, seemed to be to eschew this dramatic direction, and not have a thesis statement at all. It states this directly in a fourth-wall breaking moment between Rick and Morty at the end of the first episode, but also follows through in how relatively unconcerned the episodes in Season 4 were with touching on these dramatic through-lines established in the season before. Instead of storylines with foundations in more serious themes, Season 4 relaxes the reigns a bit to focuses on more comedic ones. Story ideas include the ridiculousness of the heist genre (S4E3 "One Crew over the Crewcoo's Morty"), the ridiculousness of Game of Thrones and similar shows (S4E4 "Claw and Hoarder: Special Ricktim's Morty"), the ridiculousness of time travel as a story concept (S4E5 "Rattlestar Ricklactica"), and the ridiculous implications of being able to predict your own death (S4E1 "Edge of Tomorty: Rick Die Rickpeat”).

While there are dramatic elements in each of these episodes, the major dramatic themes from Season 3 are no longer a prime focus. For example, the episodes do not have the emotional baggage of carrying forward the Jerry/Beth divorce storyline, bringing things back to the static “normal”. Rick is characterized less seriously this half-season, and is presented as more comedic and ridiculous. Science fiction more often appears in service of the joke, and not to seriously build upon/develop the lore of the show’s world. There is emotional depth, but (for the most part), it isn't the main feature. This is why I think a lot of the “pro-serious” criticism I saw online about Season 4 was that it is largely shallow and insubstantial, a letdown from Season 3.

Personally, I really enjoyed Season 4. Far from being frivolous, I thought it was a strong showcase of ambitious comedy ideas. I even appreciated the dramatic/meaningful moments couched within the comedic context, such as Jerry taking pride in his self-sufficiency (S4E5 “Rattlestar Ricklactica”), Rick showing that he really wants Morty to keep being his adventure pal (S4E3 “One Crew over the Crewcoo’s Morty”), and Morty’s parents expressing that they care for Morty’s well-being as he goes on these ridiculous adventures (S4E1 “Edge of Tomorty: Rick Die Rickpeat”). What I like about Season 4 is what I disliked about Season 3. I thought Season 3 presented dramatic ideas at the expense of the comedy, often seemingly trying to be more of a family drama, more of a Dune-like science fiction show, or more of a character study of a bad-ass antihero, than an actual comedy show. As one can imagine, I am a textbook “pro-comedy” fan of the show.

While my personal hope is that the episodes of Season 4 represent a more comedy-focused trend in the show moving forward (minus S4E2, “The Old Man and the Seat” which I thought was overly self-serious, but which the “pro-serious side” unsurprisingly loved), I do know that it isn’t as simple as that. Even with Season 4’s lighter tone, there are a lot of plot elements related to the more serious side of the show (i.e. parallel universe Rick and Morties, character arcs, Rick’s backstory) that I don’t think the show will drop altogether (S4E2 is enough evidence that tonally serious shows haven’t ended with Season 3). The fourth-wall breaking moment of the Season 4’s first episode reflects this ambiguity, with Rick and Morty themselves indicating that the show won’t be put into a box - indicating that the writers aren’t committing themselves to anything in particular (be it dramatic, comedic, or anything else).

In a way, I am glad that the writers don’t feel a need to follow any fanbase directive. There has certainly been a fair share of fan pressure as the show has grown in popularity, and it is good to see the show making an explicit effort to follow its own instincts instead of fan demands. Even so, Rick and Morty’s tonal divide, and the Rick and Morty split is very real. It is a split between Rick and Morty as a dramatic comedy, and Rick and Morty as a comedic drama; Rick and Morty as an innovative, absurd comedic exploration of sci-fi ideas, and Rick and Morty as a mythology-rich, dramatic meditation on a tortured genius and the impacts that his actions have on himself and those around him. It will be interesting to see how this dynamic changes as a result of this new approach, if at all. One can only hope that it will lead to a more unified fanbase, but if Reddit is any indication, one should not get their hopes up. 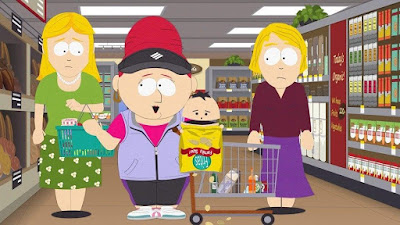 Comedy Central Yesterday's "South Park" was another classic - check out a review for the episode here:  https://www.forbes.com/sites/danidiplacido/2019/11/28/south-park-review-turd-burglars-goes-back-to-basics/#47d8429c1e98  (Warning: this review contains plot details for the episode)